Boys
At first, I looked at the dynamics of several traditional, nuclear families. I became very close to them, visiting them several times a week. I was a part of their lives, and learned their customs. Almost immediately I noticed the physical and social spaces occupied by each member. After working with a few traditional families, I found five thirteen-year-old boys who had chosen to form their own "family." Here, my concept of "family" became more inclusive. This type of community became the subject of my photographs.

While I was photographing in south St. Louis, I met Billy. I spent hours photographing Billy and his friends. Each time I visited, we went on various, new adventures, investigating their world. We explored the areas around the rivers, construction yards, train tracks, playgrounds, and the center of their neighborhood. I tried to understand the complex relationships of this age: a particular stage between child and adult. There were alternating moments of confidence and awkwardness that are important signifiers of this time. 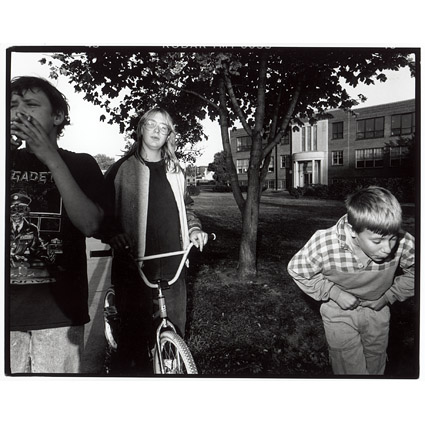